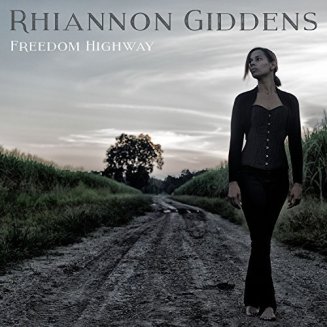 I am admittedly a sucker for female singers. Dusty Springfield, Adele, Annie Haslam, Laura Nyro, Sara Bareilles, Linda Ronstadt, Alicia Keys, Lady Gaga, Annie Lenox, are just a few of the female voices that I can listen to all day. I am adding Rhiannon Giddens to this list right now. I am not a big fan of traditional country-blues old-time music, and the first time I had even heard of her was on her outstanding contribution to Lost On The River, The New Basement Tapes, and the song Spanish Mary.

I had read some reviews a few weeks ago about her latest solo release, Freedom Highway, and despite not sampling a single track I decided to blindly order it. I WAS NOT DISAPPOINTED.

Her wiki page shows her genres to be folk, bluegrass, country, gospel, blues, jazz, soul, R&B, and American. So, what could go wrong? Well, in this case ABSOLUTELY NOTHING.

This release has an incredible range of sounds and styles, all integrated into a cohesive tracklist that ranges from sensual and emotional jazz to sharp and blazing R’n’B with a semi rapped verse in the middle of one of the songs. Some of the songs hit you right away, and others rely on an understated semi-acoustic approach that deftly showcase her impressive vocal skills. Not only are these songs great, they sneak up on you when you least expect it and get even better. From a content standpoint, she sings about the history of America’s fight against racism and her powerful songs here are based on vivid, true stories from the slavery era against classic blues, and civil rights songs from the 60s.

For me, the standout tracks are Birmingham Sunday (protest song written by Richard Farina), and the shuffle of Better Get It Right The First Time, a song about a young black man doing all the right things, going to college, etc, only to be in the wrong place at the wrong time (which includes a rap verse from her nephew). The aforementioned Birmingham Sunday, for me, is where this release hits a high note and just keeps going. Birmingham Sunday is a piano driven anthem that starts slowly, and just keeps building until it hits an emotional climax. The first time I heard it I had to play it again I was so moved, so impressed by the musical package that it is, and then I listened to it again. It is that good. In fact, this whole release is that good, and I highly recommend it.

Other Blogs I Enjoy

Bridging the Gap Between Treatment and Recovery

Alone we don't stand a chance, but together we can change the world

A Walk on the Wild Side

For those who love addicts

from liquid courage to sober courage

a writer and teacher reflects on planting, mending, writing, and other ways to live